Bokaap is found at the bottom of signal hill. Bokaap is a colorful multicultural area popularly known for its colorful houses and cobbled streets. Bokaap was formerly a township known as the malay quarter and is a historical centre of  the Cape malay culture. We went to bokaap and  walked around  marveling at the beautiful houses and took a couple of pictures albeit the feeling that we were intruding on peoples homes. Fortunately there were so many tourists also doing the same thing which made it a lot more easier. When in Cape town make sure you visit bokaap and have a look in the museum there to learn more about this beautiful area.

From bokaap we walked to Long street which is undeniably Cape towns party central. We wanted to explore a bit during the day before seeing it at night. Long Street is characterized by bars and pubs lining up the entire street, curio shops offering the best of south African authentic jewelry and also from across Africa, fast food joints etc. Along the street you will also find travel agencies that offer you services including activities that you can do while in cape town. Have a look, grab a brochure and look at your options before settling for something. I found the cutest tiniest vintage shop on long street selling some vintage clothes, records and all that is old and gold. Ring the bell and browse in the shop as you might get lucky and find something to buy :).

It was finally time to party in long street and we kick started our night at an Irish pub called The Dubliner. It was a live music sort of night and they had this lady who belted out tunes so well as we watched a football match on the many screens in there. It was also my first time to see an ATM inside a pub! LOL. Like hoow?why? He he I honestly thought oh my!not today satan!. Do you think its a smart idea having an ATM machine inside a club? 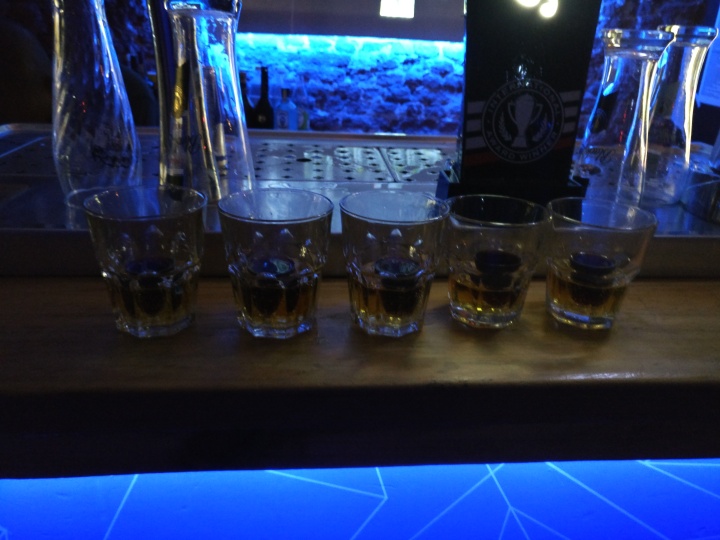 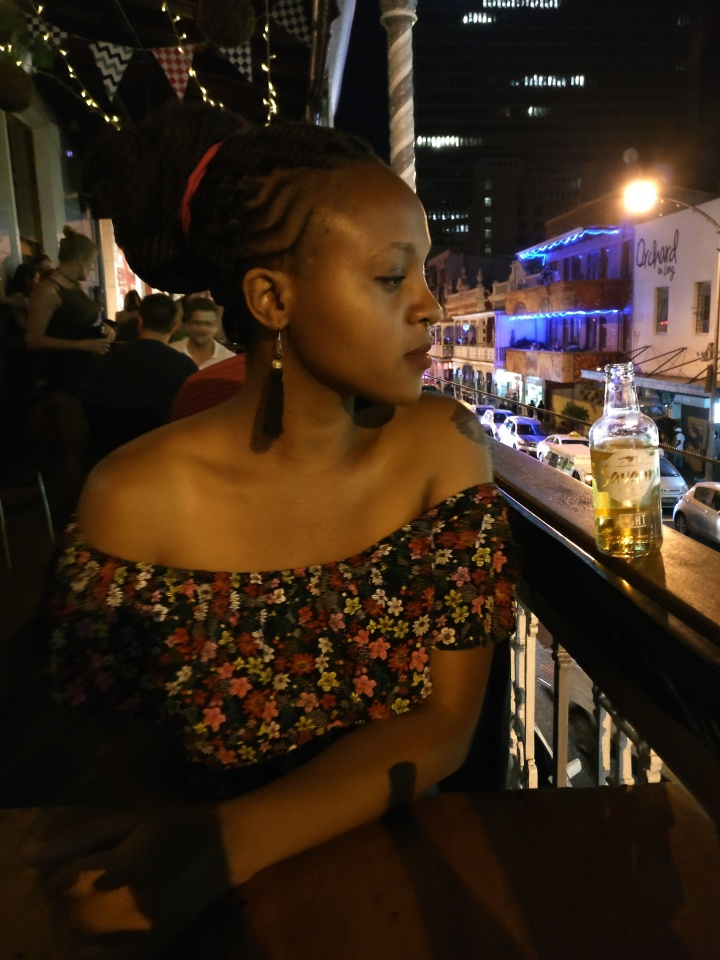 The dubliner is a pretty cool place to kick start your night, you will be able to have a conversation in there as the music is not too loud and it has a great ambiance. After a few drinks we left the dubliner and headed to Fiction bar which according to google is the best club playing alternative music on long street. True to their word, fiction bar is that and much more. The club was happening and as the new millennials say it was “lit”. They have an entrance fee of 30 rand unlike The Dubliner, but it was totally worth it and we ended up going back to party there the next day!.

We made a new friend who we named khal drogo because of his resemblance to the Dothraki leader(Game of thrones). He had previously lived in Lamu for two years and was so happy to meet some kenyans!. He announced loudly to everyone that was willing to listen that Lamu is the best place to live in the entire world!. However he was so not happy with us for having never been to Lamu and we assured him that its been on our sights for a while now and we would be visiting soon.

We got invited to the best club(his words) in all of cape town ,ace and spades who were having a rock night that was insane!!.It had been close to 4 years since I last did a rock gig and our new friend insisted we needed to let loose in the coolest bar in the cape!! Let me tell you!this place is insane!the deejay rocked us so bad!. So much headbanging took place and as a result I could barely move for two full days!! ha ha jeez that night literally took away my next 2 years of partying. Ha ha am done!!..jk. I wish you all the best if you ever find yourself at this bar, be sure to tell me how it went and beware of kahl drogo and his suggestions as you are bound to have way too much fun:-). 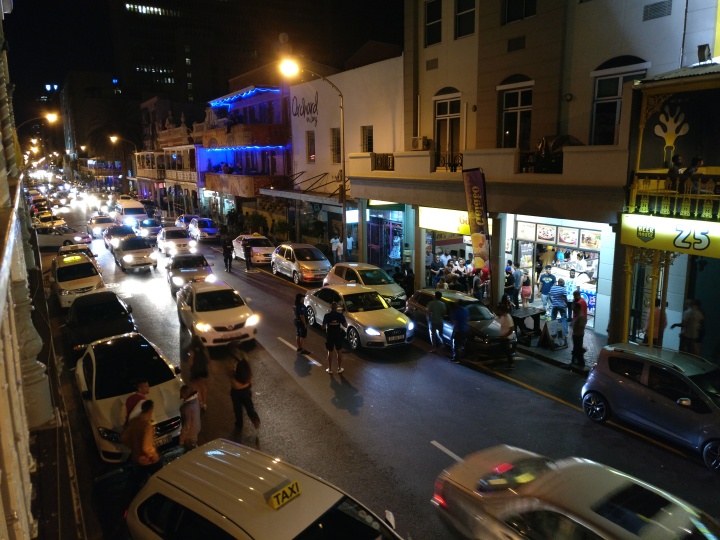 For cocktails night we decided to go to Cafe Mojito that seemed to have great reviews online. I ordered  a strawberry daiquiri which was so nice and got to play some of my favorite records on their juke box. We also had a few drinks at Joes beerhouse which is directly opposite fiction bar.When it come to the night life, Cape Town has a lot to offer  and there is something for everyone including party buses if the club life is not for you!! We went to long street at least three nights the entire time we were in Cape town and had so much fun!! he he. My advice is to be prepared for just about anything on Long street and most important, have fun!. 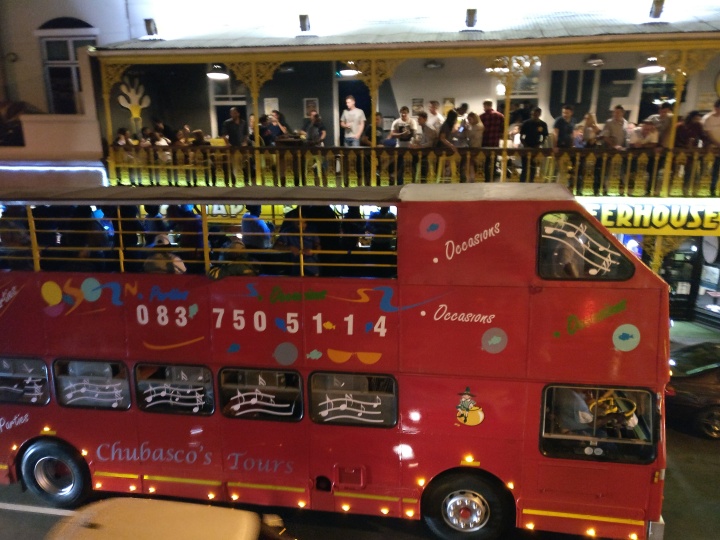 Cape town is well connected by the train and most people depend on the train to get them to work, home, school etc. We wanted to see as much as it was possible and we decided to take the train from pine lands all the way to Simon’s town .

The view along the way is amazing and as you get farther away from the city center the ocean comes into sight . The waves crashing on the rocks as you go past them and it somewhat feels like you could touch the water from your seat on the train. Our plan was to go all the way to Simon’s town which is close to the cape peninsula but we ended up getting off at Kalk bay. 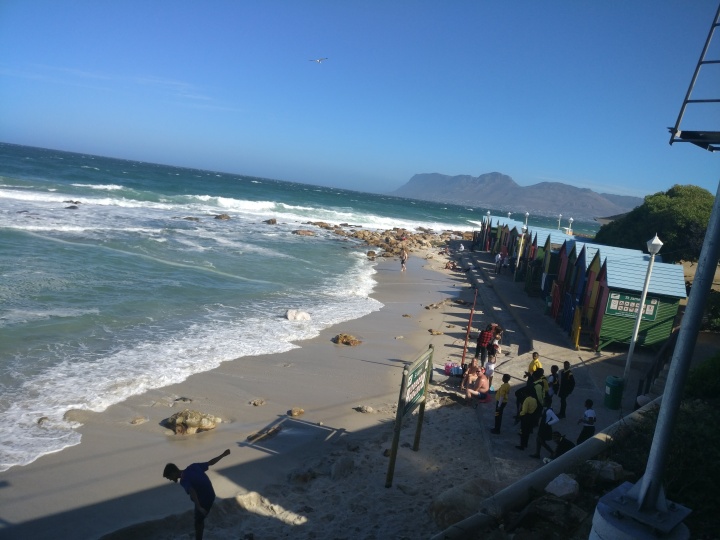 Random plans are always the best, somebody had recommended kalk bay and am happy we stopped there. Kalk bay is a small fishing village buzzing with local fishermen, antique shops, bohemian arty vibes and has a super relaxed vibe. Its capes best hidden secret and is hard to believe this retro village is actually a part of Cape town. Having one of the best reefs for surfing in Cape Town, this village is buzzing with loads of surfers from all over the world. 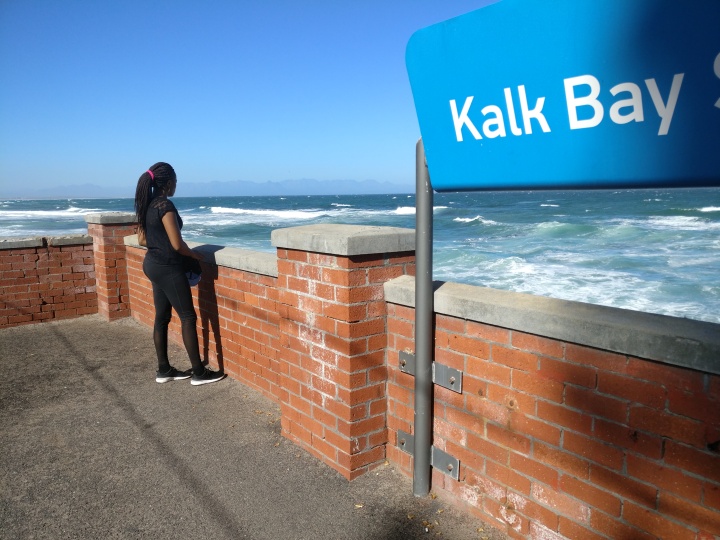 Our first stop was the Cape to Cuba restaurant which was so nice, and we felt like we had been transported to Cuba. Right from the dressing,the cigars, the cocktails, the art, the food, the music..*sigh*. Beautiful. I now feel like I have been to Cuba! Ha ha. The food and cocktails are amazing and the view of the Atlantic ocean caps it all.

After a lovely meal we took a walk to look around and our first stop was the bookshop and we browsed around for a bit.

There is also the kalk bay theatre that is famous for hosting plays , poetry nights, live music and open mic. Its one of kalk bays most visited site and I highly recommend a visit. We then walked down to the harbor where you will spot many fishing boats and if you come in early in the day you might spot the famous fish auction with the local fishermen. Right on the harbor is kalk bays best hidden secret ,kalkys fish and chips. This restaurant is thronged by both locals and visitors and has the best fish and chips in all of Cape town!. 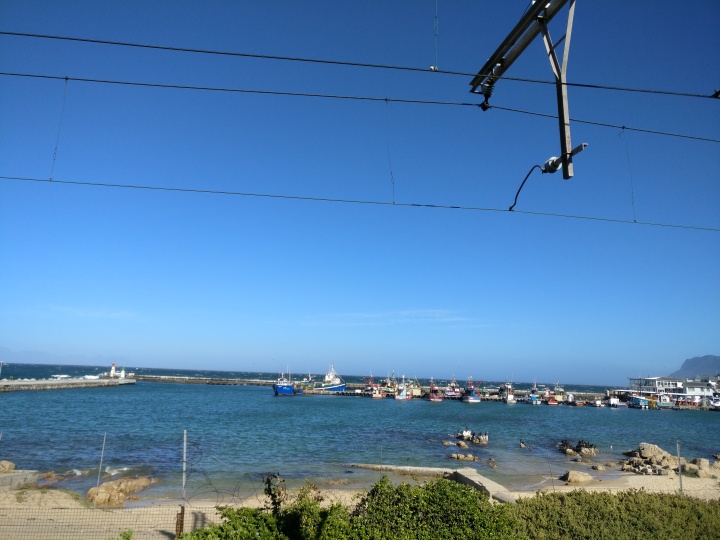 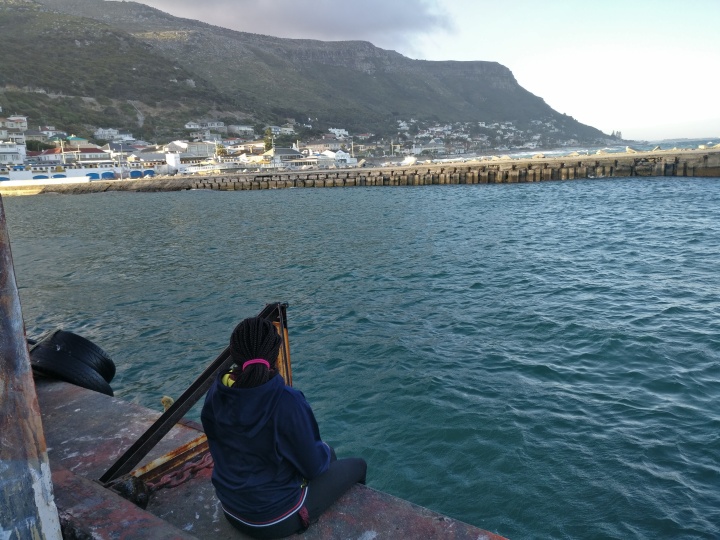 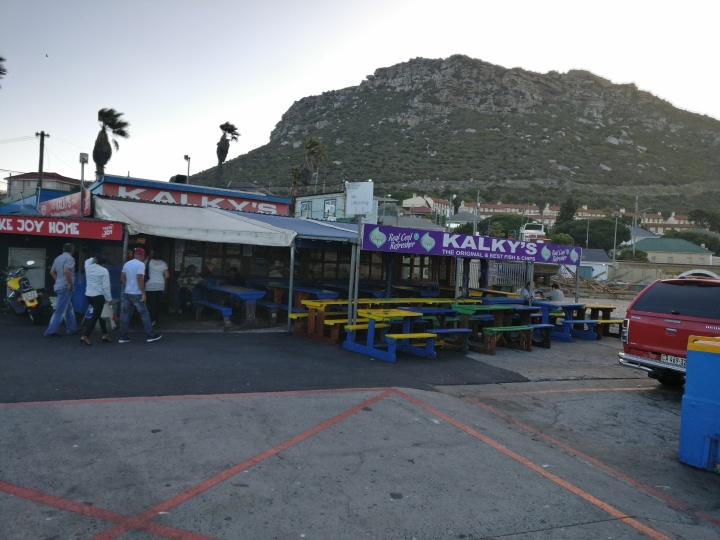 Fish hoek is also another coastal town found on the false bay same as kalk bay side of the Cape peninsula. Fish hoek is around 15 minutes walk from kalk bay and we decided to walk there and take the train back to cape town city centre from there. As you walk on the beach you can spot sign posts warning you of shark sightings and precautions you should take. That scared me a bit as a kid I remembered that I had read so many shark horror stories from South Africa. 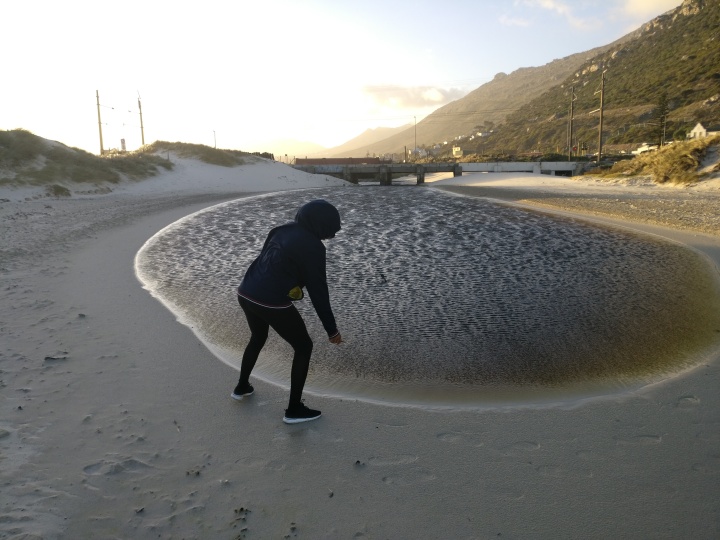 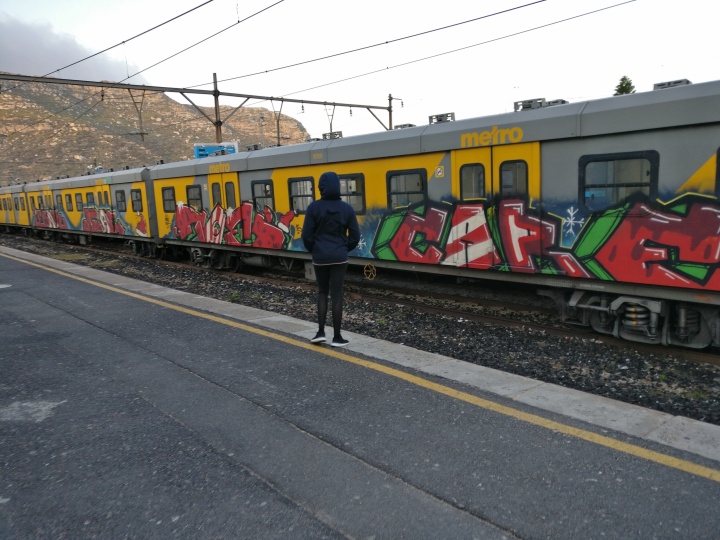 We had considered doing shark cage diving and I was willing to face my fears and brave it out. However we met other people that had paid to do it and when they did it seemed that the sharks just did not show up!. Which sucks because there is no refund :(. So before you do it make sure you do your research properly. If you get the chance go all the way to Simon’s town and maybe from there you can go to the cape peninsula and even boulder beach where you can spot penguins :).

On our last Sunday in cape town there was the cape cycle tour. Cape Town is heaven when it comes to outdoor activities as it has so much to offer and basically there is everything for everyone . Every year Cape Town hosts a big cycling event( Cape Town cycle tour) which attracts cyclists from all over the world. When we got to Cape Town the event was scheduled for 12th March and it was quite evident from the huge billboards at the airport that it was a huge event.

Our Uber driver excitedly told us about it and made us promise not to miss it. However it seemed that God had other plans because on that day it got so windy that the event had to be cancelled for safety reasons. The wind was insane and there was even a few casualties as the bikes were flying all over making it impossible to cycle. Such a bummer!!. If cycling is your thing this should not discourage you from doing the Cape Town Cycle tour in future. Let us know if you decide to do it next year, we would love to connect and maybe share tips on how to ensure your bike does not fly ;).

This is just but some of the things we got around to doing and doesn’t mean that is all that cape town has to offer. There is so much you do and soon I will do a post a guide on things that you can do, how to get around, accommodation etc. I hope that I will inspire you to put down Cape Town on your bucket list if you haven’t done it already!.

Thanks guys for reading this!<3. 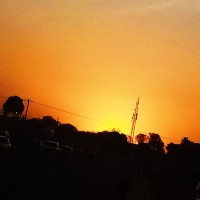 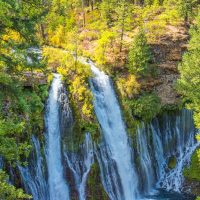 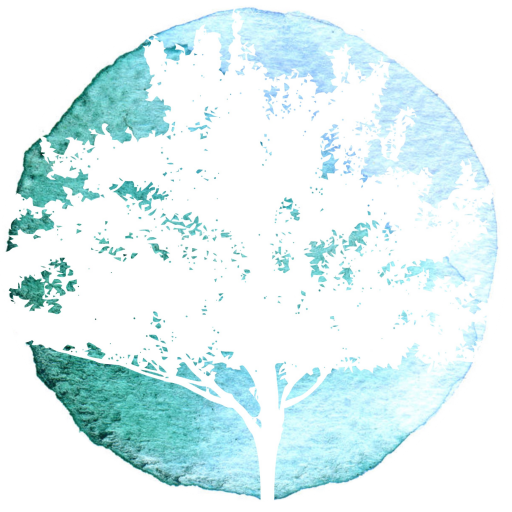